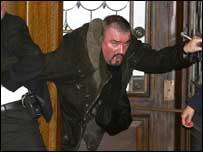 This is a new one! “Performance art”. Jesus fuck. Was his attack on Milltown Cemetery 20 years ago performace art too? Should the media coverage be in the Tate? Is “art” going to be the latest excuse added to the growing list of laughably insulting reasons people have given to justify terrorism intimidation, murder and general antagonism in Northern Ireland?

This is just an example of the pantomime that goes on in NI. It’d be a hilarious reality sitcom if it wasn’t so serious. If it didn’t routinely cost lives. If it wasn’t so fucking depressing. It’s no wonder the young people who aren’t (like myself) leaving it’s shores in droves for jobs, study or love overseas, are killing themselves in record numbers.

It’s being reminded that Northern Ireland contains people degenerate scum like Michael Stone that makes me want to stay in Finland, but then I remember that this nature is present in people all over the world, even amongst the zombie-like career alchoholics in Suomi, it’s just for some reason accepted in NI by the passive majority and if outraged people who don’t agree with it just leave that majority will grow rather than shrink until there is nothing left but scum and cowards. Northern Ireland needs new thinking. People who won’t tolerate the small minded petty inbred casual bigotry that’s been let grow unchecked for years. Good people need to be stand up and be counted, otherwise no-one will ever know they exist.

“His only crime was loyalty”

…oh, and he murdered a lot of people too.