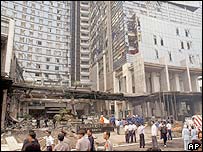 Do you remember when terrorist attacks weren’t linked to Al-Queda? Those were the days eh? Independant terrorism. With no links with other terrorist factions other than to trade weapons and stratagem. I blame capitalism. all the small terrorist groups are being bought up by the bigger groups. Soon we’ll have no choice. Nothing but huge multinational terrorist groups. It’ll be like [Cobra] in G.I.Joe with super-gangsters equipped with these amazing sc-fi weapons lead by characters with vary abilities and costumes who will stand with their hands on their hips and laugh heartily in tight trousers when a planned assault goes off.

Maybe that’s it. Maybe that’s the conspiracy theory? that behind all this terrorism these days is the likes of Hasbro, who are taking control of all the minor terrorist factions to build a super-terror-faction with no other goal that to promote the sale of [action figures]?

Or maybe it’s just lots of governments saying their local terrorist groups are linked to Al-Queda in order to jump on the War On Terror bandwagon and get strong-arm assistance from the USA?

Strange how with all these eastern European and Asian terrorist groups getting linked to Osama and Saddam and any other high powered individual in the middle east that they don’t like that no-one is linking the still [active] IRA to middle Eastern terrorism despite all the [PLO] graffiti (they don’t pay enough attention know know about Hamas or Islamic Jihad) intermingled with [IRA] graffiti and the Palestinian flags flying along with Irish tricolours in hardline republican areas all over Ireland.

So how come with the US Marines having tore their way through Afghanistan, romping over Iraq cleaning out the terrorists, using pressure tactics against Iran, Syria & Saudia Arabia, floating halfheartedly outside Liberia, the US government invite convicted and unrepentant terrorist leaders in Ireland to tea and help them get jobs in government?

Is it the US revenge machine is taking it country by country and will get around to Ireland before or after they sort out the Basques? Or is it only terrorists that threaten US citizens or interests? I’m not sure, have the Spanish Basque seperatist terroritst or the Irish republican terrorists ever killed any US citizens or US interests? Well not the Irish terrorists probably, otherwise why would US business have [given them so much money for years] through NorAid..

No, the US revenge machine only wants revenge on those that attack the US. That may explain why they are so seemingly disinterested in Liberia.

So maybe they should rename the ‘War On Terror’ to ‘The War on Islamic Terror’? Rather than trying to imply to the rest of the world that they care even remotely about terrorism from any other group. And they only seem interested in Islamic terrorists who attack the US or US interests in other countries. they don’t seem interested in terrorism in any other country. Bushes speeches to the US people only talk about defending American interests. So any talk of preventing terrorism in other countries is nothing but lies. Despite encouraging help and assistance from other countries who foolishly assumed that they might return the favour in kind, that all terrorism would be stamped out rather than just those that threatened American Interests. Did any of these countries read the [mission statement for the PNAC]? Probably not. Probably aren’t on the internet. I fear with most countries the governments still use spies and intelligence gathering agencies etc to do snooping for information rather than just using [Google] like normal folk. If they’d used Google they’d find out that the PNAC [junta] are only interested in promoting US leadership abroad and leading the American people to be the rulers of the world ([PNAC.info]). Many of these governments will no doubt be fingered as cruel and abusive dictators to be overthrown if they don’t toe the line. It’s very much a fact that this current US administration isn’t interested in defending other countries from terrorism, other than making the off condemnation or making some slender gesture of solidarity in order to be seen to be helping in some way and thus placate their ‘allies’. The US [War On Terror] is about smiting those that the US have offended to the point of extremism and removing obsticles to commerical exploitation of the middle east. Especially the areas bordering the state of Israel which is probably the US’s biggest ally outside their own borders… though they tell most countries that, like the UK (Of course I love you baby, those others mean nothing to me, nothing, it’s just pillow talk, that’s all it was with them, honest.)

What a fucking mess.

And they say it’s not another crusade…